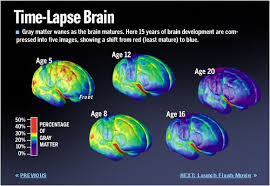 With recent technology, we have learned that a great deal of brain development takes place through the teen years all the way up to at least age 25. From age 12 to 25, communication between brain cells gradually increases by a hundred times.

But it is to the teenager’s advantage that these physical changes move slowly in the brain from the rear sections which manage more basic functions such as movement and vision to the prefrontal cortex which is used for our more complicated thinking abilities. For as the speed with which the brain works increases, the growth in connection among cells slows down, and it becomes more difficult to learn new things. Many of us have discovered that learning a second language is never as easy for the adult as it is for the child! While delay in growth of the forebrain leads to more impulsivity, it also extends the ability for new learning and adaptability as teenagers face the challenges in becoming independent adults.

Anthropologists describe that across cultures, teenagers are drawn to novelty, risk, and relations with one another – traits which are important for the teenager in attaining independence.

Adolescents love a good thrill, and it can be dangerous. But it also drives them to seek adventure and explore new experiences. And a willingness to take risks is helpful to them in preparing to leave the nest for a less secure future.

Teenagers are especially willing to take risks for something that they really want. The teenage brain’s peak sensitivity to neural transmitters involved with reward (Dopamine) and with social bonding (Oxytocin) combine so that they are especially driven by social rewards. There is research to show that teenagers will take twice as many risks when they are with friends than when they are alone.

A teenager’s friends are most important to them. Brain scans have shown that teenagers react to peer exclusion as strongly as to physical threat. And their success in the future depends heavily on their ability to build relationships and relate well with peers.

Of course, there are many hazards with which teenagers must deal including substance abuse, sex, and violence. Studies have shown that teenagers need and benefit from parenting practices which support independence while providing guidance and affirmation. More on that next month! 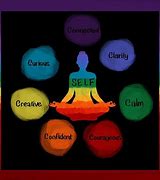